Cheese isn’t a food characteristically known for being low in fat and calories. When it comes to fat and calorie content, goat cheese has the advantage over traditional cheese made from cow’s milk.

While cow’s milk cheese generally has around one-hundred calories and ten grams of fat per ounce, goat cheese only has about eighty calories and six grams of fat. This makes goat cheese a better choice if you’re trying to watch your waistline. Plus, you’ll benefit from the five grams of protein in a single ounce of this tasty cheese! 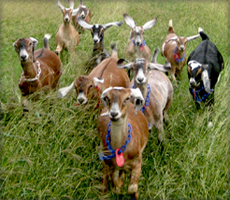 It’s more digestible than cows milk cheese. Around a quarter of the American population suffers from lactose intolerance, a condition which makes it difficult to digest lactose containing foods such as milk and cheese. People who are lactose intolerant are often able to tolerate goat cheese even if they have problems digesting conventional cheese made from cow’s milk.

Goat cheese is versatile too. Add fresh herbs to soft goat cheese or use it as a bread spread in place of butter. It’s also delicious in salads and on pizza. Try tossing it into a pasta dish or using it in place of mayonnaise on a sandwich. Spread it on whole grain crackers or use it in lasagna. It also makes a delicious addition to mashed potatoes.